Master of My Heart Excerpt

Who wants to read an excerpt from Master of My Heart???
Sabrina woke next to a man, her head on his bare chest and his arm around her. Without thinking, she trailed her hand down his flat stomach and onto his morning-hard cock. She stroked it a few times over his pants, then slipped under the waistband to feel his silken skin.
As she stroked him, she wondered who she was in bed with. It wasn’t Ramon. It also wasn’t unusual to not know who she was waking up with. It happened plenty of times, and she knew what was expected of her.
He moaned in his sleep. She pushed his pants down below his balls and slipped down under the covers to take his cock into her mouth, sucking on it and stroking it with her hand.
He shifted his body and moaned again. His hand moved to rest on her head and she sucked harder. It usually didn’t take too long in the morning.
It didn’t really matter who Ramon left her with, as long as she pleased him.
She pushed her head down and took more of him into her mouth. He moaned again and grasped her hair in his hands. She continued, taking as much in her mouth as she could. She had been told many times that she was good at sucking cock. She hoped she pleased…whomever this was.
Suddenly, he grabbed her shoulders and pulled her up, rolling her onto her back. He stretched out on top of her and slowly pressed himself inside her.
She cried out softly. He was thick and it felt so good. She kept her eyes closed against the morning light. This man was kind, and she didn’t want reality to ruin the pleasure. His mouth pressed against hers, his tongue demanding entry into her mouth. She parted her lips. A jolt of heat slammed into her lower body.
He wrapped his arms around her back and kissed her, thrusting in and out of her. Oh God, that feels so good! He was gentle, but the thrusts were firm. She matched her movements to his and relished in his thickness that filled her so deeply.
He moaned into her mouth. “You feel incredible,” he whispered, trailing his tongue down her neck. She cried out in pleasure as he sucked on the skin above her collarbone.
His thrusts became more insistent. She moved her hips to give him the most pleasure she could as a thank you for being kind. She felt her own release building and wrapped her arms around him as he groaned. She knew he was close. When he groaned again, she felt him empty himself into her as she came, crying out her own release. Her whole body shuddered with pleasure. She couldn’t help but let out a deep sigh of satisfaction.
His chest heaved, his face buried in her neck. She trailed her fingernails down his back and opened her eyes, still trying to figure out—
Oh no!
Master of My Heart (coming May 29, 2018): http://bit.ly/2Fv1ooU
Pre-Orders (everywhere except Amazon): http://bit.ly/2L01mYr
Goodreads: http://bit.ly/2GuvdFl 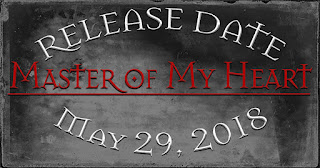 Posted by Marissa Honeycutt at 12:30 PM

Email ThisBlogThis!Share to TwitterShare to FacebookShare to Pinterest
Labels: Finding Sabrina, Master of My Heart, Sabrina