Book Recommendation: The Beast and The Sibyl by AJ Adams 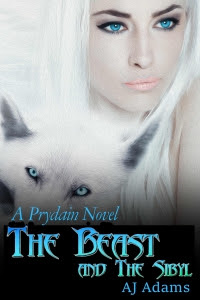 The Beasts, those inked macho men from Prydain, are back!  The latest novel follows the story of touchy, proud, bad tempered Siv and Bliss, the sexy healer who has some super special paranormal talents.

The Beast and The Sibyl is a paranormal romance, and although there are cameos from characters in Beast, it can easily be read as a standalone.


Teasers
Bliss, standing up for herself... 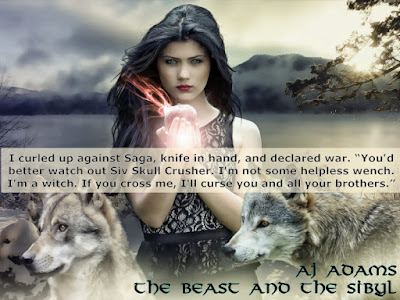 The unexpected complications of mind reading.... 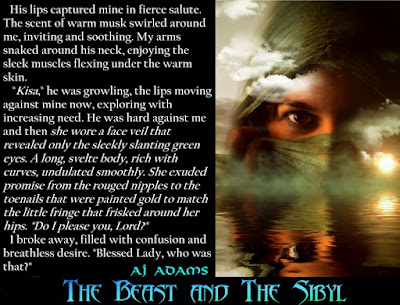 They stood around me, giving me a good kicking.
“Die, Beast!”
I felt one of my ribs go.
“Kill him!”
Another went.
“Let me at him!”
Whoever it was, he was enthusiastic because I passed out. When I came to, I was locked up in a cage. Right, just like an animal. It was made of metal bars an inch thick. Old and rusted in places but solid. Lifting my head, I could see a large key hanging on the opposite wall. It was well out of reach. There was also the matter of the hog tie.
My arms were aching, my legs were screaming, and my trashed ribs meant every breath was liquid fire. I could still feel the skin on my wrists and ankles burning with the pull of the rope, but it wouldn’t be long before I’d go numb with pain. Once that happened, I would be deader than last week’s catch.
I was alone. They feared me so little that they’d not bothered to post a guard. Clearly they thought the rope and the cage would hold me. I’d show them they were wrong. I’d get out, kill every last hrafnasueltir and burn the place down. But how?

Read more »
Posted by Marissa Honeycutt at 6:00 AM No comments:

Email ThisBlogThis!Share to TwitterShare to FacebookShare to Pinterest
Labels: promotion

Today I am so happy to be helping out on the week-long, new release party for Kristi Cramer's novel, Last Shot at Justice!

Detective Mitzi Reardon just became the prime suspect in a murder she didn’t commit. On the run from enemies and coworkers alike, Mitzi must put her trust in Blue Thomas, an old-school cowboy from Kansas. Against all odds, they must bring the real killer to justice.
As a trap closes around them, Mitzi devises a bold escape strategy that may just get both of them killed. "Kristi Cramer knows how to keep the suspense pumping in this never-a-dull-moment thriller." Calvin Dean, author of Curses, A Door Unlocked, and The Epitaph of Jonas Barloff. "Stunning dialogue between the characters. Humorous and action-packed. Blue feels like a real person." N.D. Taylor, author of The Spellbound Consortium series of Urban Fantasy. Last Shot at Justice is A Thomas Family Novel, a series of suspenseful standalone novels featuring characters connected to the Thomas Family of Syracuse, Kansas. (Series was formerly titled The Boys of Syracuse, Kansas.)